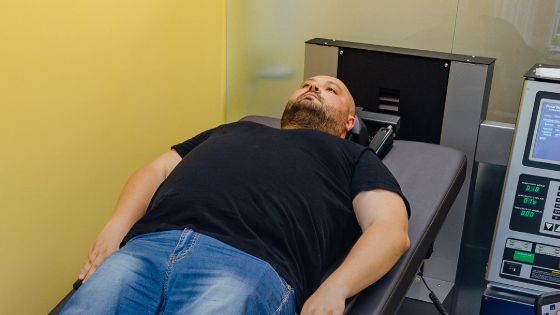 A study published in the Journal of Physical Therapy Science found that 80% of low back pain is caused by an intervertebral herniated disc often referred to as a bulged or slipped disc.

What is an Intervertebral Disc?

The human spine consists of 23 intervertebral discs. Each disc acts as a joint between two vertebrae of the spine. These discs are vital to ensure normal functioning of the spine and act as stress and shock absorber between vertebrae.

What is a Herniated or Slipped Disc?

Herniated, bulging, or slipped disc also referred to as “herniated nucleus pulposus” occurs when a portion of the gelatinous inner core of the disc pushes through a crack or a tear in the thick outer ring.

Why do Slipped Discs Happen?

Typically, a herniated disc occurs due to aging-related wear and tear, or a sudden traumatic injury.

Aging, obesity, and smoking are some of the risk factors for developing a herniated disc. Occupations requiring repetitive physical strain like lifting, twisting, bending, and driving are also at a higher risk of disc herniation.

What are the Effects of a Slipped Disc?

Disc herniation causes increased pressure on the spinal cord and often on nearby nerve roots. A herniated disc also contributes to inflammation of the nerves in the surrounding area.

What is a Pinched Nerve? Why Does it Occur?

A pinched or compressed nerve also referred to as “radiculopathy” occurs when a nerve is pinched by pressure from ligaments, tendons, or bone. The pressure on the nerve leads to pain, tingling, numbness, or weakness.

Spinal decompression relieves pressure on the herniated disc by controlled stretching of the spine. The negative intradiscal pressure increases the supply of nutrients and oxygen to the affected disc encouraging natural healing. This helps in pain reduction and increased range of motion. Pressure relief on herniated disc subsequently relieves pressures on pinched nerves thereby reducing inflammation and irritation of the nerve and providing effective pain relief.

In a clinical study conducted by the Journal of Physical Therapy Science, it was concluded that spinal decompression therapy is clinically effective as a treatment option for those suffering from a herniated disc. The study noted that there was an increased range of motion and significant pain relief as well increase in the disc height during the 6-week treatment plan. The increased disc height was also associated with the reduction of inflammation and irritation of the surrounding pinched nerves providing effective pain relief.

In another study published by the BMC Musculoskeletal Disorders, it found that non-surgical spinal decompression provided pain reduction and increased disc height for those suffering from a herniated disc.

Contact us today to set an appointment. We’d like to see you and discover if we can help relieve your Spinal Decompression pain.

Start Eliminating Your Back Pain Today!